February 24, 2015
This post is long-overdue…but as promised I’m going to share some of my likes/dislikes about my machines today!  So feel free to skip this post if you really don’t care…I won’t mind. ;)  Instead of writing a couple of posts I’m putting it all in this one.  So warning…this is looong. 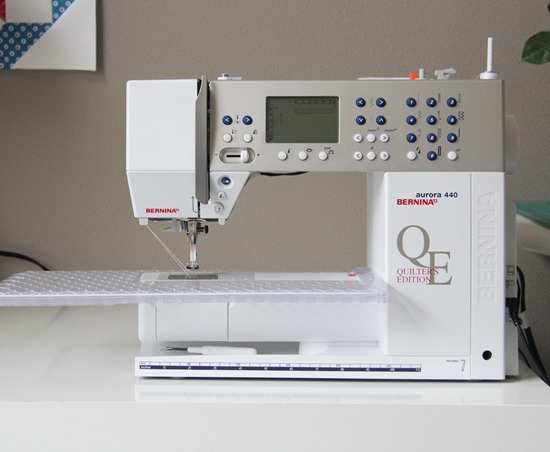 I love my Bernina Aurora 440QE.  I’d buy it again in a heartbeat, and there are very few things I dislike about it.  It’s a popular machine so there is lots of info about it on the web, and I believe there is a newer version of it.  But it is lacking in a few areas and that’s where the Juki 2010Q comes in.
There are gobs of great reviews on the Juki, like here, here, here, here, and here.  I had problems with my first one after using the walking foot, I explain it at the bottom of this post, and they sent me a new one with no problems. 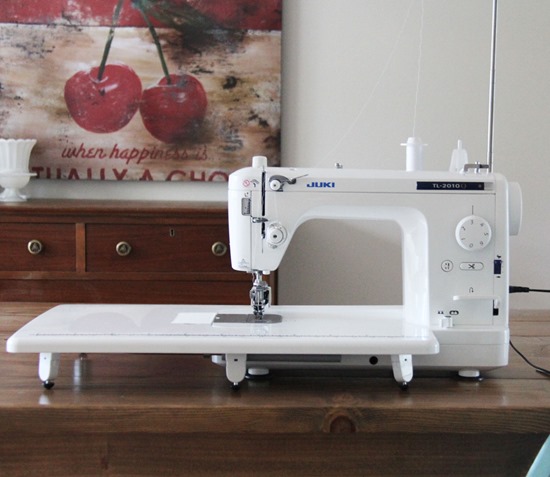 Since there are so many features to review I’m just going to list some of the ones I’ve noticed the most.  If you can think of any others you love/don’t love about either feel free to leave them in the comments!
Buying the Machine and Parts:  You have to buy Bernina’s through a dealer, along with all parts.  You can buy a Juki machine or parts from a dealer, or through many online retailers.  I bought mine on Amazon, through a dealer.  Bernina as far as I know doesn’t allow any selling of it’s feet or parts online…which is a little crazy now-a-days.  I get their reasoning and it’s great to shop at a local dealer…but the last thing I want to do is drag my 3 kids into the Bernina dealer every time I need something little.  I’ve seen a few places that sell Bernina parts online, but it looks like their prices are double or triple what you’d get at your local dealer.
Price:  Bernina’s are expensive…I paid $2200 for my 440 almost 3 years ago, and that was a great deal at the time (they are much less now I believe).  My Juki was $975.  So there is a big price difference.  The Juki only has straight stitches, so you might need a second machine if you want all of that.
Throat Space (or whatever you call it):  The space from the needle to the right of the machine is way bigger and higher on the Juki.  On the Bernina the space is 8” wide by 4 1/2” high…not very big to smoosh a big quilt roll through.  The Juki space is 9” wide and I think it was 6” high (and downstairs is too far to go re-measure!) so the Juki space is awesome. 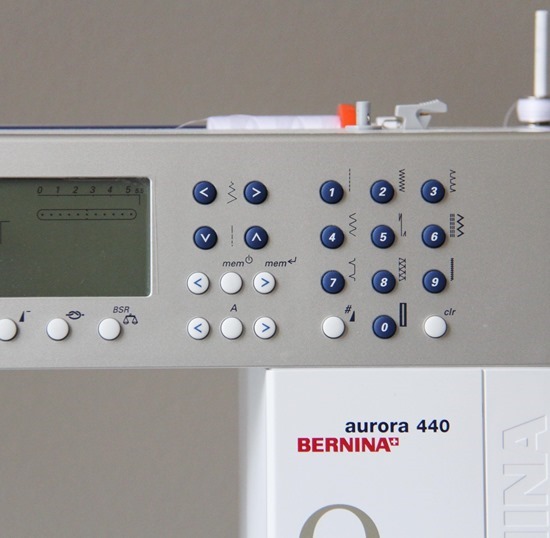 Stitch Speed:  The Bernina sews 900 stitches per minute.  The Juki sews 1500 stitches per minute.  The end.  ;)
Stiches:  The Bernina has something like 180 stitches, and does the alphabet and all sorts of amazing things.  I don’t use it often but it’s nice to have, especially the zig-zag stitch which I use to stitch around the quilt edges before binding (see this post).  The Juki only has a straight stitch…nothing
else. 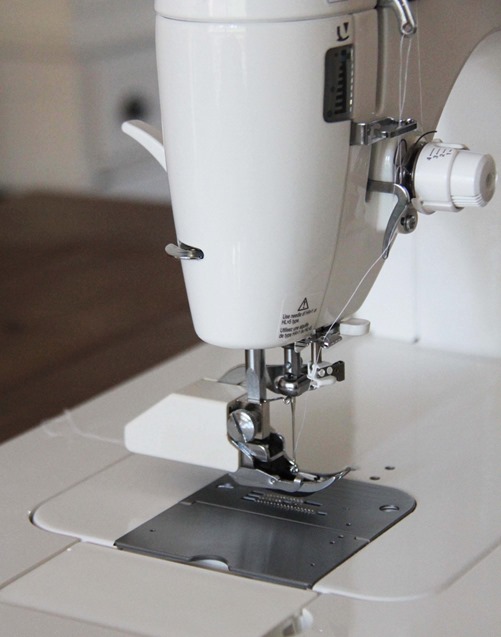 Walking Foot:  I bought the Juki mainly for quilting, so I expected to use the walking foot all the time.  This is one area where the Juki is a disappointment…and after to talking to two dealers, Juki knows this needs to be fixed.  The walking foot on the Juki is tricky to get on, and SO SO loud.  Even after oiling the foot, it’s really loud.  I even sent them a video just to make sure I wasn’t breaking the machine…they assured me it is that loud.  It also doesn’t pull the fabric through like I felt it should.  I’ve had a few puckers on the bottom of my quilts while using this.  You should only have to guide the fabric under the walking foot while quilting, not pull or push it through like I have to with this machine.  Also you aren’t supposed to go full speed with the Juki as you use the walking foot, more like mid speed as the dealer’s repair man told me.  Which is kind of a bummer since I bought this so I could quilt at warp speed.  Not a deal breaker though.
The Bernina walking foot is quieter… as quiet as I’ve heard a walking foot.  It also pulls the fabric under the foot with very little help from me, creating less chance for puckers on the bottom.  It’s also easier to get on…and you can change the pressure of the presser foot if your quilt is really thick or thin.  Bernina definitely wins in the walking foot category.
I know others with Juki’s might totally disagree about the walking foot being a bit of a downer, but that’s been my experience compared to the Bernina.
Free Motion Quilting:  I have to admit I have only done this once on the Juki so I’m not the best to tell you about it.  I love it on the Bernina, and on the Juki it seemed really fast and stitches were even.  The foot bounces a bit, but I watched this great video from Leah Day where she explains some mods she did to the foot and I might try those. 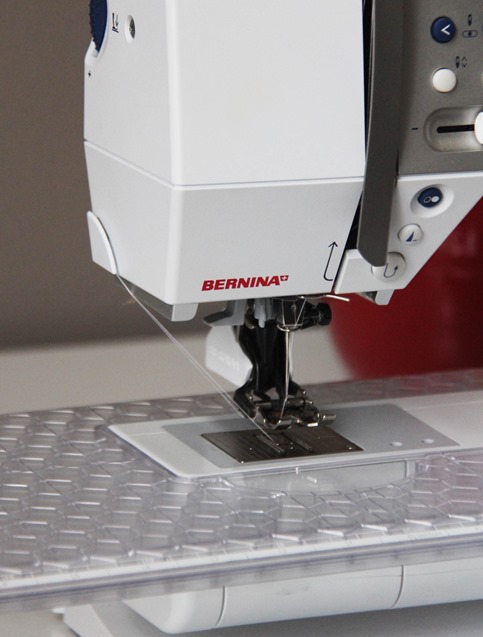 Changing Feet and Bobbins:  Changing feet and bobbins is easier on the Bernina, but I’m also used to Bernina’s.  It’s not a big deal and the big screw makes it pretty easy on the Juki too.  The Bernina has a separate bobbin winder on the top…I love this feature. 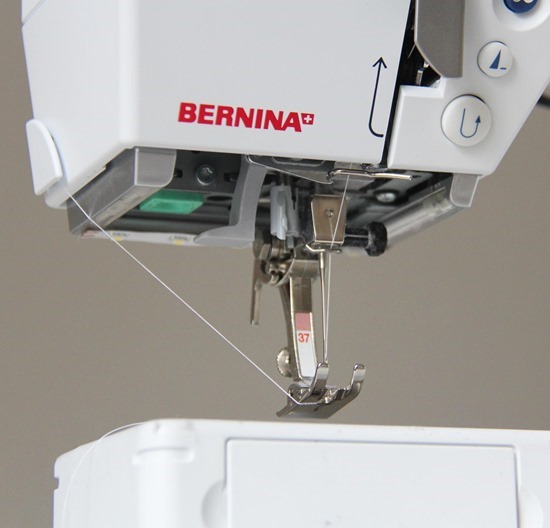 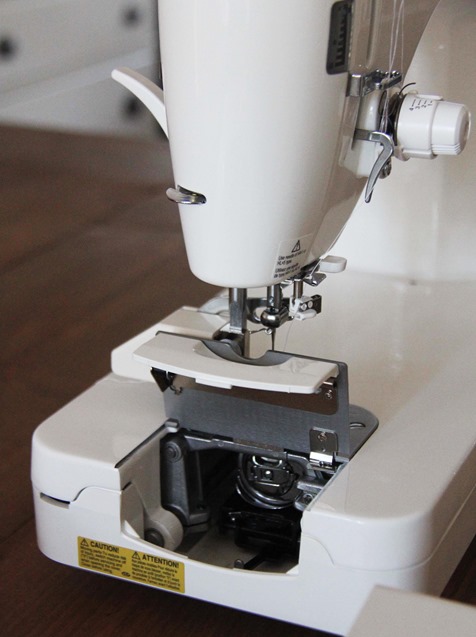 Other things I like/dislike:
Juki 2010Q:  It comes with a great extension table as you can see from the second picture from the top.  The automatic thread cutter is awesome (but a really loud clank each time), and you can activate it by pushing the foot peddle.  There is also a knee lever (the Bernina has this too) so with the knee lever and the thread cutter quilting straight lines is a breeze. This machine is all metal, really sturdy (and heavy) and cheaper to fix with NO COMPUTER SCREEN.  It has to be oiled each time you use it in 6 different places which is a bit annoying, but worth it for a sturdy metal machine.
Bernina 440QE:  I really have no beefs with the Bernina that I haven’t mentioned, except that is SO expensive to fix and maintain.  I haven’t had too many problems with mine (knock on wood) but even to have it cleaned is over $100, and I’ve broken a few tiny parts here and there with wear and I’ve put over $400 into this machine in repairs.  Six months ago my light went out, and while having it repaired they said it was a motherboard issue in the computer…even though the computer screen works just fine and it sews fine.  To fix it it would cost $260.  Annoying.
Instead I found this awesome attachable strip light on Amazon (here and here are reviews on it).  I attached it to my machine and viola!  I had light!  It’s still semi-pricey at $30 bucks (I bought the 2 pack, one for my Juki too)…but it’s cheaper than $260 and the light is even better. 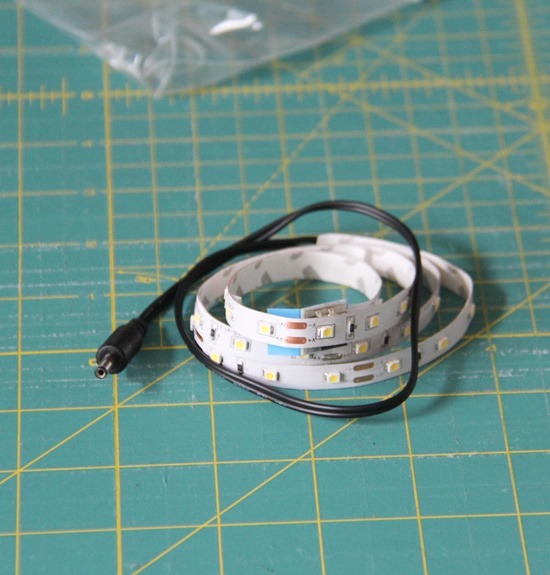 It sticks on where you want it and then attaches to the machine and has it’s own power cord.  Pretty slick. 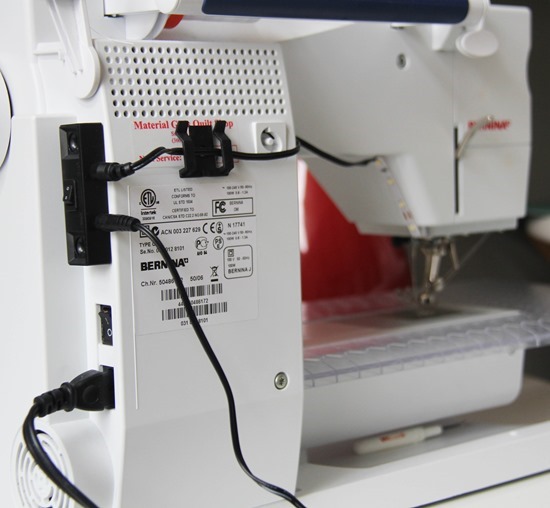 So there you have it.  I love both of these machines and I’m happy I bought both.  If I had the money to spend I would have skipped buying a Juki and upgraded my Bernina, but with my Bernina working fine I couldn’t justify it.  I also didn’t want anything more computerized than I already have, so the Juki is a nice addition to the family and should last long enough to hand down to one of my kids someday.
There are other great machine options too if you’re in the market…talk to lots of people and visit lots of dealers, or visit a quilt show where you can try a lot in one place.  You might find you love another brand even more than these.  Machines are personal preference and what you feel comfortable with is more important than what other people (including me) have and use!
All of the opinions are my own and I was not compensated for them… or else they might be pretty mad with some of what I said.  ;)  There are a couple of affiliate links, but I will still like you a lot of you don’t use them.
February and Franklin
Tuesday tip…pressing!